The role of SOM models

Models play an important role in the advancement of science. Models allow us to test hypotheses, confirming or rejecting them. Models that focus on the carbon, nitrogen and other elements through plant and soil system are known as biogeochemistry models (Figure 1). 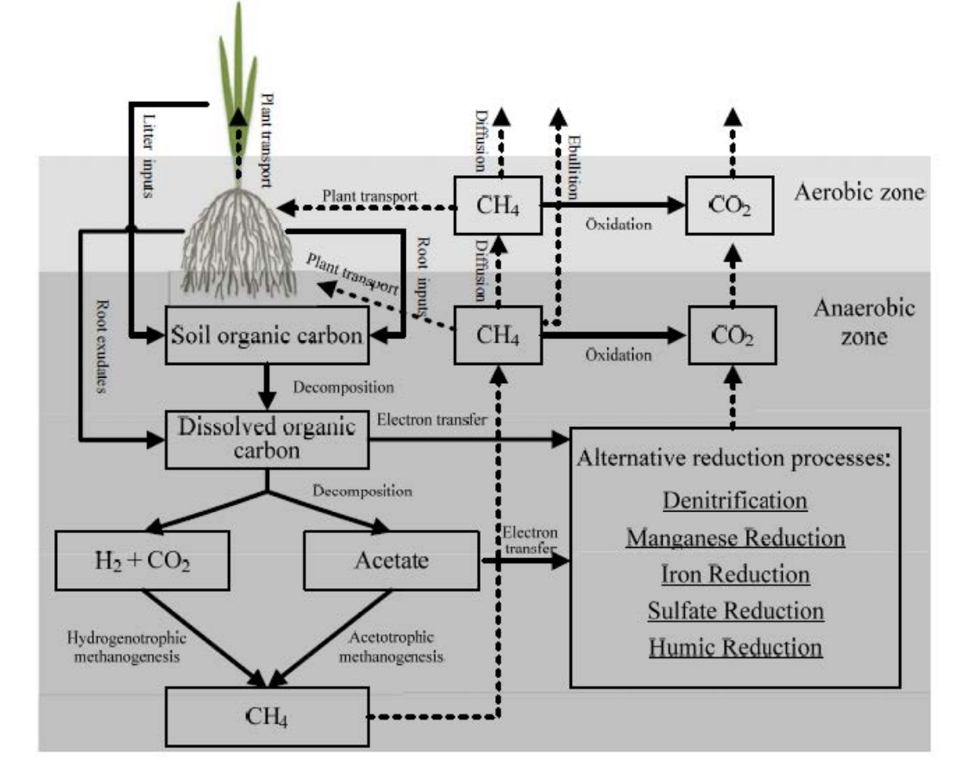 Figure 1 – As an example, see the approach that the modified DNDC SOM Model uses to simulate soil biogeochemistry and GHG dynamics. From [DNDC (Version 9.5) Scientific Basis and Processes

Scientists have been investigating Soil Organic Matter (SOM) dynamics for a long time. Since the 1930s, more than 250 biogeochemical models have been developed at an average rate of 6% per year (Figure 2). SOM Models correspond to mathematical frameworks applied on a chosen conceptual understanding of soil dynamcs and available data. Models are simplified representations of reality constrained by theoretical developments, available data, computer processing technology, and existing mathematical and statistical frameworks. Over one-third of the citations are concentrated in approximately 5% of existing SOM Models, with the CENTURY model developed in the mid-1980s leading them all. 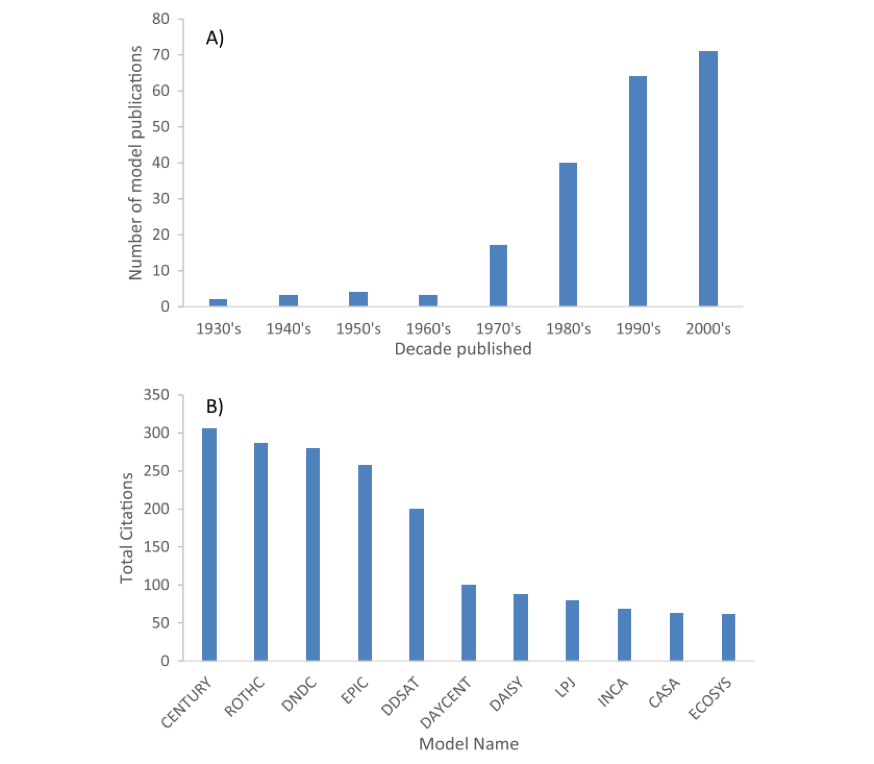 Figure 2 – The development of new SOM models occurred at an exponential rate in recent decades, but just a few have been cited multiple times. From [Campbell and Paustian (2015)

Century is the most popular terrestrial biogeochemistry model. It was developed to simulate the dynamics of carbon, nitrogen, phosphorus, and sulfur in plant-soil ecosystems, including grasslands, cropland, savannas, and forests (Figure 3). The model encompasses three SOM pools (active, slow, and passive), each with a different composition and turnover time, and focuses on the analysis of the 0-30 cm depth soil. Although it has been updated throughout the years to incorporate new developments, it is not well-suited for estimations at the microsite level. 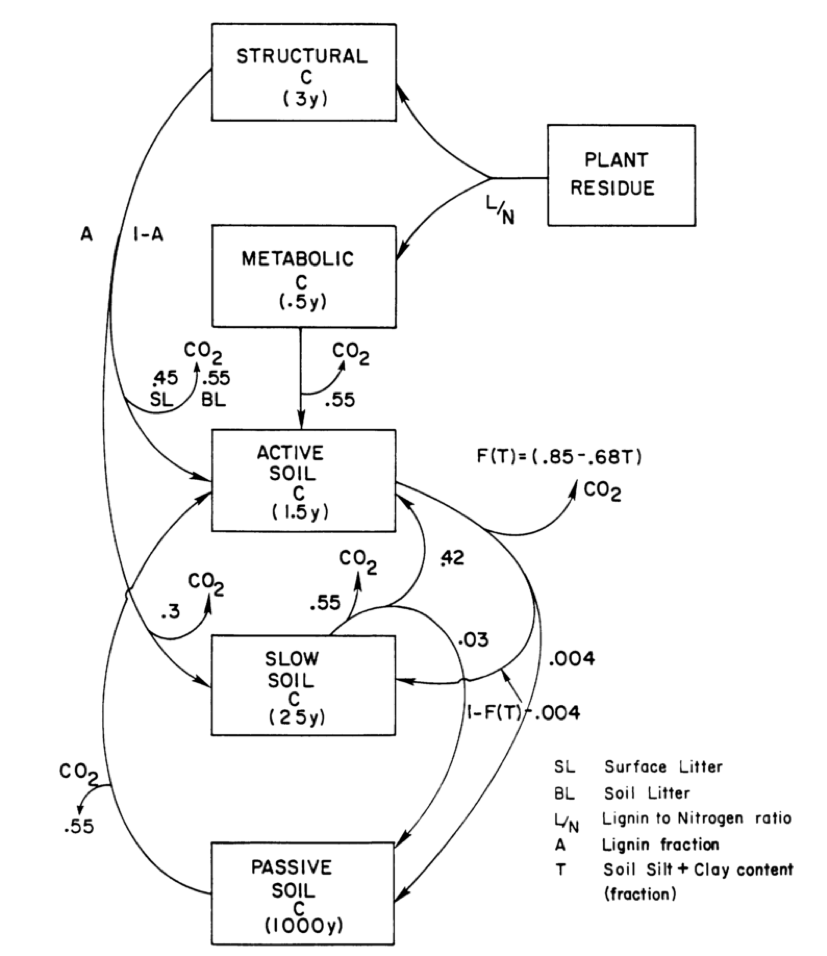 As we have access to more data at the microsite and at deeper soil levels (below 0-30 cm), our understanding of the SOM dynamics at this scale is changing, providing new evidence that contradicts previous assumptions. Thus, based on an analysis of SOM models, Campbell and Paustian (2015) state that:

“Ideally, a SOM model would be based on mechanistic understanding of SOM dynamics, use SOM pools that can be informed by measured data, and be valid across multiple scales. At this point in time, however, no single SOM model yet fits this ideal.” 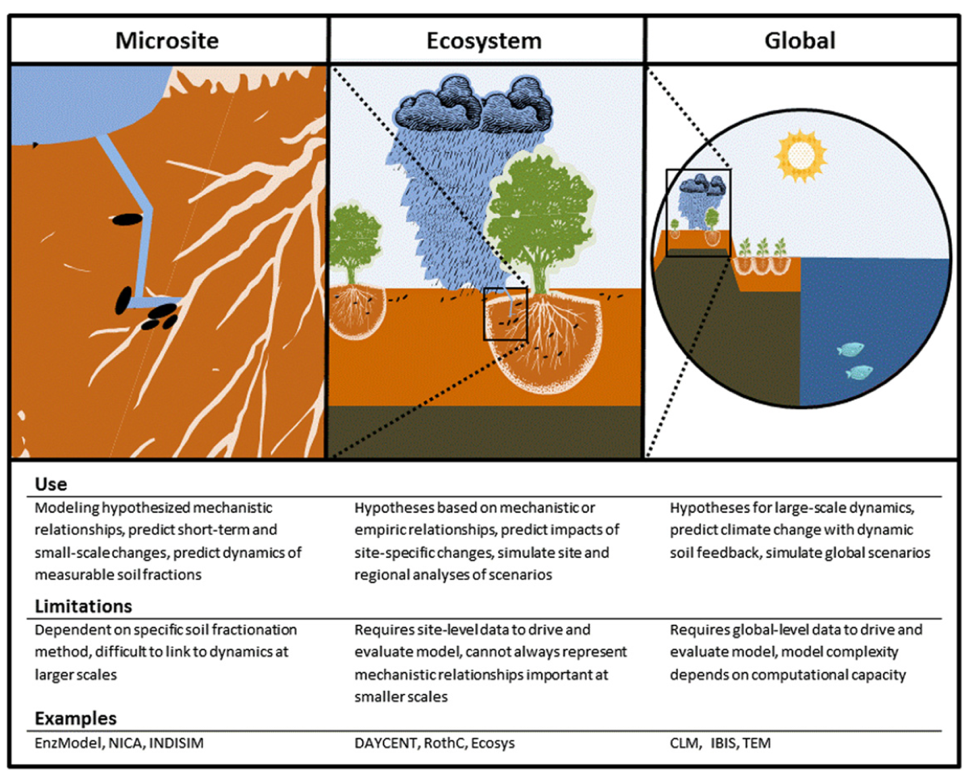 Figure 4 - One of the main challenges faced by SOM models is to estimate across spatial and temporal scales. From [Campbell and Paustian (2015)

SOM models have been criticized due to errors in estimation when applied across different temporal or spatial scales, other than their original focus. Campbell and Paustian (2015) call our attention to five critical areas for new developments in SOM models: “microbial roles in SOM stabilization, SOM saturation kinetics, temperature controls on SOM dynamics, deep SOM dynamics, and modeling SOM in [Earth Soil Models] ESMs.” Models, such as the Century model, were structured on three pillars - theory, mathematical modeling, and data. As we have access to more data at the microsite level, scientific advancements contribute to a better understanding of belowground dynamics. Since our knowledge about SOM dynamics evolved, it challenged essential assumptions of past models, such as SOM stabilization in complex and stable ‘humic’ molecules and first-order decay kinetics for mass loss. In a 2003 paper, Schimel and Weintraub exposed the lack of suitability of SOM models to explain soil microbial dynamics (microsite level) and the influence of exoenzyme activity on total C flow. It turns out that new evidence does not corroborate the synthesis of recalcitrant ‘humic substances,’ shifting the interest from the size of pools to fluxes at surface and subsurface soil depths.

Figure 5 - Despite the new emergent view of the nature of SOM (link to Jon’s post), the development of a model is not an easy task. To build a robust model requires the connection of the hypothesis, data and equations (formulation), fine-tuning (calibration), representations of exogenous variables (drivers), and periodic tests of the model (evaluation). However, through time, many of the assumptions of the SOM models were proved wrong, such as the 1st order decomposition rate. From [Campbell and Paustian (2015)

The potential of belowground carbon sequestration to mitigate climate change requires a mechanistic approach to SOM dynamics at different scales. As scientists propose and test new hypothesis and create new measurement methods, there is a demand for new and improved models (link to Jon’s post).

To explore SOM models, go to: