You may find interesting:

What does it mean to have organic matter associated with minerals and why is this important?

Mineral-bound organic matter is organic matter that is adsorbed to mineral surfaces, co-precipitated with minerals, or entrapped in small aggregates (link to Hannah). Much of the organic matter in soils is present in mineral associations. For instance, in temperate, cultivated soils that comprise some of the most productive soils in the world, 50-75% of the organic matter is present within clay-sized organo-mineral particles (Christensen 2001). Because this is such a large reservoir of soil carbon understanding the dynamics of organo-mineral associations are critical for understanding the overall dynamics of carbon in soils. Furthermore, protection of SOM in mineral associations is an important mechanism governing the persistence of SOM, even after serious disturbance events (Kiem and Kogel-Knabner, 2003). 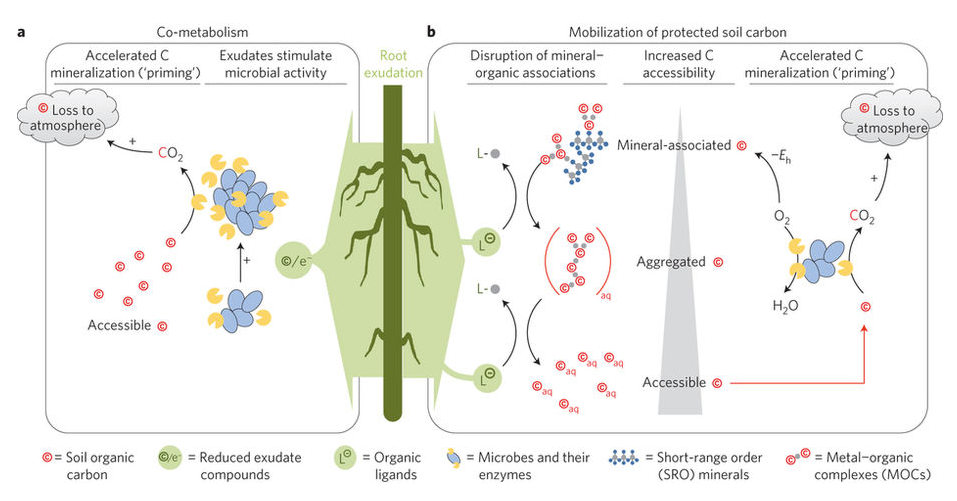 Association of organic matter with minerals can increase it’s persistence in soils. Often, OM in association with minerals has a older mean age than non-mineral associated OM (Kleber et al, 2015). This longer mean age is typically explained by the high bond strength between OM and the mineral and this often results in an increased resistance to microbial decay (link to microbial access). 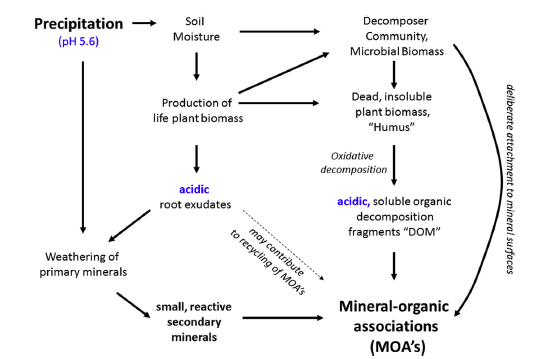 The Relationship Between Particle Size and Organic Matter

A negative correlation between particle size and organic carbon in soils has long been recognized as evidence of a close association between clay-sized particles and soil organic matter (SOM). Part of the reason for this relationship is the high surface area to volume ratio (specific surface area) of smaller particles. The high specific surface area of clay-sized particles provides more substrate for both colonization by microorganisms and direct adsorption of organic matter. More recent work has shown that this relationship is due also to the chemical affinity of organic matter for the iron and aluminum oxides that comprise the smallest and highest surface area minerals. Figure 3 below shows organo-mineral interactions in the right bottom corner, where molecular size is smallest and polarity (i.e. reactivity) is highest. Organomineral interactions also likely influence the C:N ratio in soils. Often the C:N decreases as particle size decreases. Soils with high sand content generally have higher C:N ratios than soils with high clay content, which typically have a lower C:N ratio (Six et al, 2002). N-compounds have a high affinity for mineral surfaces (Kleber et al, 2007), and this likely explains the greater abundance of N-containing compounds in clay-rich soils (Mikutta et al., 2006; von Lützow et al., 2006). 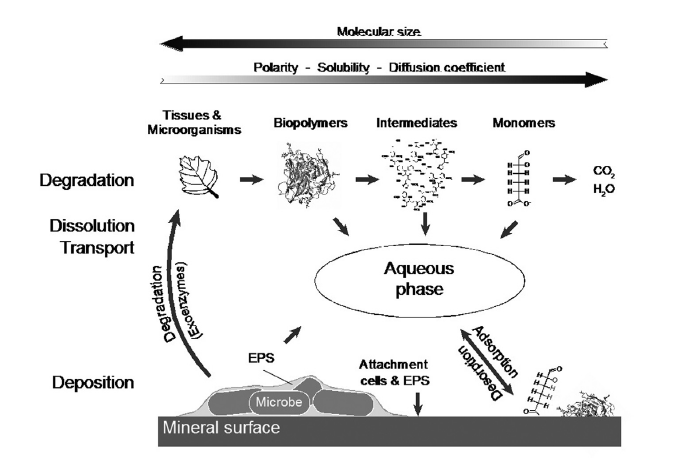 Nature of organic matter that associates with minerals

Where does the organic matter in these organo-mineral associations come from? Organic matter that becomes associated with minerals can derive from plants, microbes, or necromass (dead microbial biomass). Determining the precise pathway a molecule of organic mater took prior to becoming mineral associated is an active area of soil science research. Plants provide a large variety of inputs to the system. These are in the form of biomass (i.e. dead plant matter), root exudates, and other plant-derived products including mucilage, cell fragments and plant-derived biopolymers. Plant-derived organic matter provides a substrate for microbes to act upon. Roots physically and chemically weather soil and rocks in the profile and produce small, solubile organic acids accellerate weathering. Often these compounds are present at high concentrations in the rhizosphere and they can stimulate microbial growth and further accelerate interact between organic compounds and minerals.

Mineral associations with organic matter are facilitated under the conditions of: high soil moisture, intensive weathering and soil acidification. They can can still occur in dry, neutral/alkaline soils, but both the abundance and strength of mineral organic associations is lower and may be more prone to disturbance.

How does organic matter interact with minerals?

In order for organic matter, however derived, to associate with minerals, many things need to occur. This process was first described by Hedges and Keil (1999) as the “partitioning model.” First, this organic matter must be physically broken down into smaller pieces in order to move through soil. Since water (a polar molecule) is the solvent in soil, this organic matter must become soluble in water, something that happens easily in an oxidizing environment. Oxidation also renders organic matter more reactive towards mineral surfaces. At that point, they can adsorb to those surfaces as long as conditions favor it (i.e. functional groups on OM, mineral composition, pH, etc). Alternatively, OM can be directly deposited on mineral surfaces as extracellular polysaccharides (EPS) or root exudates.

There is growing evidence for “zonal structures” on mineral surfaces with the layering of organic material on minerals. The basis for this idea comes from work by Schmidt et al (1990) in which they show that it is easier or harder for organic matter to dissolve depending on where in the soil the organic matter is. In other words, there are different turnover times for both C and N within the same organo-mineral complex.

More recently, Physical fractionation data led Sollins et al. (2006) to postulate that sorption of proteins to minerals might create a basal layer to which other amphiphilic molecular fragments would adsorb more strongly than they would to clean clay surfaces, creating a zonal effect, with N-rich compounds more abundant near mineral surfaces, and C-rich compounds more abundant farther from the surface.

The above figure 4 provides a visualization of organic matter interactions with various types of minerals and their associated zones. The three zones elucidated by Kleber et al (2007) are described below, and include the contact zone, the hydrophobic zone (not always present) and the kinetic zone.

Hydrophobic zone: chemical properties of mineral surfacers masked by OM attached at the contact zone – can be hydrophobic zone created if hydrophobic functional groups exposed. Combined with the contact zone, this can create a “bilayer” on the mineral surface. Alternatively, polar portions of molecules can be exposed, which does not create a bilayer, but rather creates additional reactive sites that can bind to additional OM.

Kinetic zone: variable chemical properties depending on chemical/physical properties of both the OM and the soil solution. No common principle(s) that determine what this zone looks like. Proposed to have OM with shorter residence times - OM is partitioned rather than sorbed at this point (weaker associations). Thickness of this layer may depend more on availability of OM than on chemical/physical properties thereof, and a high exchange rate is postulated for OM in this layer.